“Are there any useful strategies to help in decision-making?”
Anonymous (via Quora) 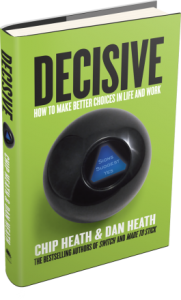 Decisive: How to Make Better Choices in Life and Work

In the book “Decisive: How to Make Better Choices in Life and Work”, authors Chip and Dan Heath describe a four-step process for decision-making which they summarize with the acronym “WRAP”. The premise behind the decision process is that as humans we have illogical biases to overcome.

The very common pros and cons approach reveals our biases as we tend to self-select a limited set of options. Psychologists note that humans tend to look for confirmation for our untested believes. We rely on short-term emotions to make choices. We’re overconfident about our ability to make predictions for the future.

Humans tend to present ourselves with decisions as one option versus another: Do we try to make our current job work or find a new job? The last choice would most likely include parts of both options:

“The universe has no fixed agenda. Once you make any decision, it works around that decision. There is no right or wrong, only a series of possibilities that shift with each thought, feeling, and action that you experience.” Deepak Chopra, The Book of Secrets: Unlocking the Hidden Dimensions of Your Life

For example, if we’re having problems at work, consider fully discussing concerns with managers and coworkers. Continue to test new problem-solving strategies. At the same time, it could still be wise to look into other opportunities. The discussions at your current job both help in your work life and tell the questions and criteria for your search. If a concrete offer for a new job becomes a certain reality, then you’re making decisions with more evidence to know how each role meets your needs.

How the framing effect influences decisions 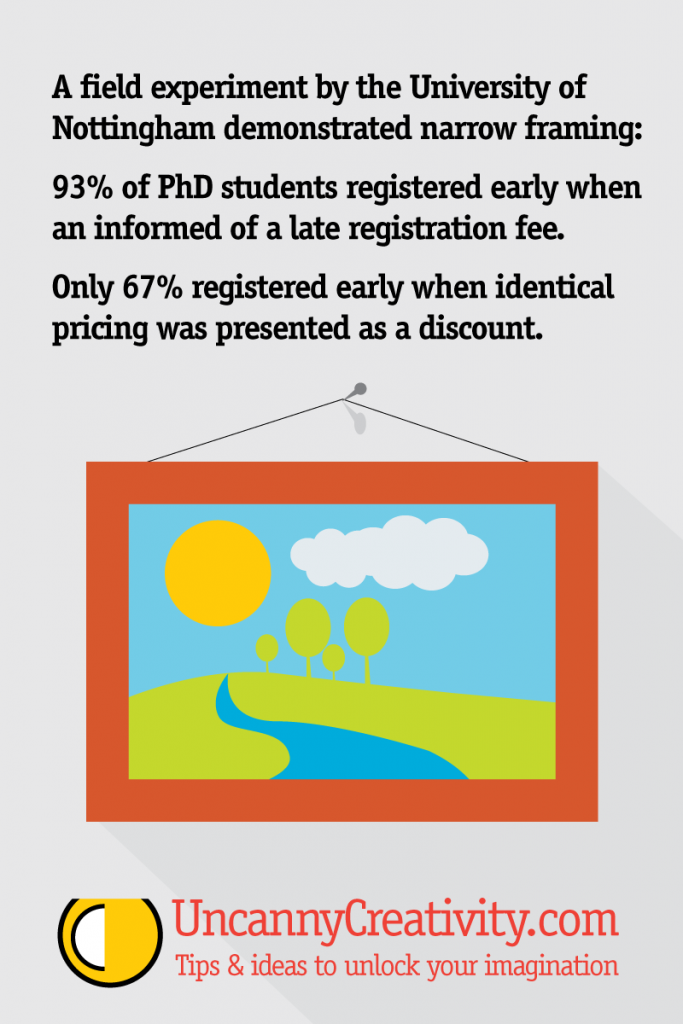 ming effect is a mental process where conclusions are illogically drawn based on how choices are presented. A field experiment by the University of Nottingham demonstrated narrow framing showing that 93% of Ph.D. students registered early when an informed of a penalty fee for late registration. Only 67% registered early when identical pricing was presented as a discount.

An experiment published in the Journal of Law, Economics, and Organization found that support for an economic policy was greater when presenting the numbers for the employment rate is emphasized. Giving the related unemployment rates garnered much less support. This is a common tactic used in politics to influence public opinion while not presenting the reality potential outcomes.

How opportunity costs limits our options

To counter the framing effect and force ourselves to consider more options, we can explore the opportunity costs involved. What actions would, in fact, rule out other choices? If you must decide between:

“In economics, one of the most important concepts is ‘opportunity cost’ – the idea that once you spend your money on something, you can’t spend it again on something else.” Malcolm Turnbull

In the book Decisive, the authors recommend adding the possibility for both actions. Rather than choices “A OR B”, are both “A AND B” possible? Could you bring your movie-loving friend to the party and/or ask to see the movie on a night when you don’t have an accepted invitation?

Consider the opposite of your ideas and guesses as potentially valid. Is there evidence that contradicts your current thoughts on probable outcomes?

“When we hear news we should always wait for the sacrament of confirmation.” Voltaire

Confirmation bias is a common reasoning error. Experiments have shown that people search for evidence consistent with their current beliefs and predictions. The term “confirmation bias” was coined by English psychologist Peter Wason whose simple experiment in the 1960s showed that people tend to try to confirm their first ideas and not disprove them:

However the answer was not even numbers, it simply increasing numbers. Participants tended not to try odd numbers to disprove their first guess.

With confirmation bias in mind, take small steps giving more evidence toward one outcome or another. If you believe a person you’re dating is not reliable, for example, you might ask to commit to plans. Look for evidence that they are able to be relied on.

The next small step resulting from their response may be further discussion of the pattern of behavior. During this talk, you could look for evidence that they attempt to be more reliable.

“Great things are not done by impulse, but by a series of small things brought together.” Vincent van Gogh

If you contradict your first guess, you may decide this someone you can easily spend time with and continue to date. Or you may find more anecdotes showing unreliability, which helps you decide relationship styles are incompatible. Taking small steps gives you more confidence in your final decision.

A – Attain distance before deciding.

In dealing with short-term emotions, it’s helpful to explore various perspectives. Our emotions impact us in unpredictable and irrational ways. Psychologists tested the tendency to perceive new events consistently with the involved emotions. They found fearful participants predict negative outcomes and when angry they presume positive ones.

“You can’t make decisions based on fear and the possibility of what might happen.” Michelle Obama

Writers Chip and Dan Heath recommend asking “How would you feel about this decision in 10 minutes? 10 days? 10 years?” If you were not involved, what advice would you give? In the short-term, it might feel great to eat a bag of chips or skip that trip to the gym. By attaining distance and thinking about how we might feel in the future, it becomes a lot easier to act.

A decision often becomes emotionally difficult as we feel the conflict between various priorities. By identifying your distinct preferences, you’ll often be able to more clearly see. You’ll have a more clear idea of your best answer for your situation.

Is your long-term priority better health? Compared this to your short-term priority of instant gratification. You might decide to eat a balanced meal skipping the fast food ultimately feels more satisfying.

P – Prepare to be wrong.

In preparing to be wrong, we acknowledge and take steps toward various likely outcomes. The overconfidence effect is a natural human bias. We tend to view our own actions as more certain to guarantee outcomes. More so than is likely or possible. We believe that we are more certain to know the truth than we really do.

In fact, the results of our decisions likely fall within a wide range. Some factors and events could not be predicted. Other possible outcomes that we could have predicted, we did not. Perfect decisions that give us perfect control are the least likely possibility.

An example of overconfidence is demonstrated in the planning fallacy, first proposed by Daniel Kahneman and Amos Tversky. The planning fallacy is the tendency to guess a task takes less time than it likely will.

One 1997 survey of Canadian taxpayers showed that participants mailed taxes about a week later than they predicted. Even as those surveyed reported in the past that they mailed forms later than planned, they still estimated that would get it done earlier in the future.

A wide target is easier to predict. If these taxpayers guess that they’d mail their taxes sometime within the next year, they’d be more likely to be correct. Compared to if they guess that within the next week they’d complete the task.

Prepare to revisit your decision by setting triggers. If X happens, at that point revisit your decisions. If you were investing or gambling, you might be comfortable with losing 10% of your money. Once you’ve lost 11%, it’s time to decide if this it’s wise to continue with your current strategy or test something new.

Be ready for positive outcomes too. If the person we were dating in the earlier example on reality testing does become a reliable planner, what does this mean for the relationship?

Since things happen that are hard to predict, it’s smart to prepare for the unexpected. For example, financial experts recommend emergency funds even as they discuss tracking spending and creating plans for how to pay your bills.

No plan is perfect. We often can’t predict what we’d need to use our savings for. We can guess that an unexpected event will happen. Many situations would be easier and less stressful if we have extra money available for it.

Next time you’re deciding to take that expensive vacation or buy a fancy dinner, consider a 2012 study cited by Vanguard that found that those surveyed had: unpaid medical bills (26%), overdrew their checking account (22%), took a loan from their retirement account (14%), took a hardship withdrawal from their retirement account (10%), had more than one late mortgage payment (13%), and filed for bankruptcy (3.5%). If you think this can’t happen to you, re-read the section on overconfidence. Then start to act and start your safety net.

Readers, what strategies have helped you make better decisions? Share below in the comments! 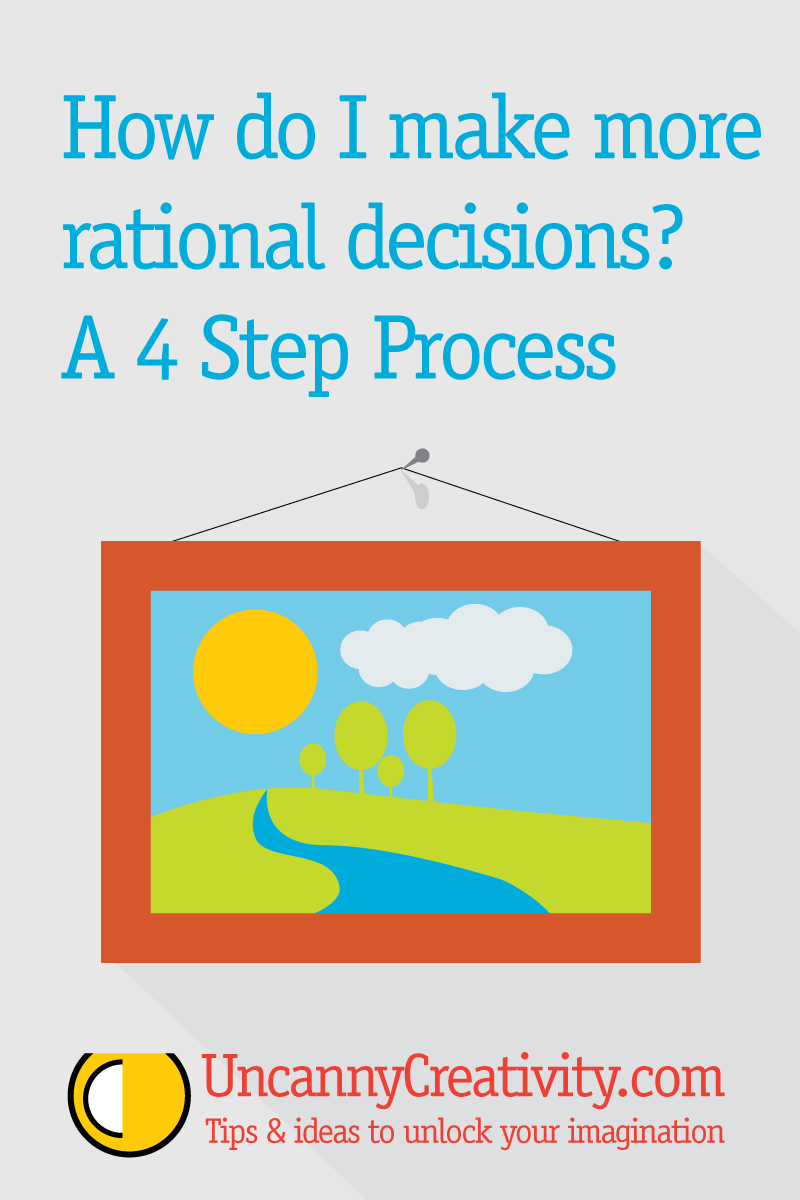 Brian E. Young
I'm a graphic designer (portfolio), classical pianist and artist in Baltimore, MD. I host the Uncanny Creativity Podcast helping to demystify the creative process and creator of Funlooksfun.com, an online shop for apparel and games. Twitter: @sketchee