What drives your creative projects more: the thrill of the fresh start OR the finish line?

Learning to love both makes us productive and creative.

Creatives love the part in the middle where we get to indulge in the business of making things. At the same time, I’m betting that you’re creativity sparks more from either (a) the love of starting something new or (b) the satisfaction of completing a task.

Imagine the nature documentary. The love of a new start VERSUS the joy of completion.

I see this Creative Drive spectrum as 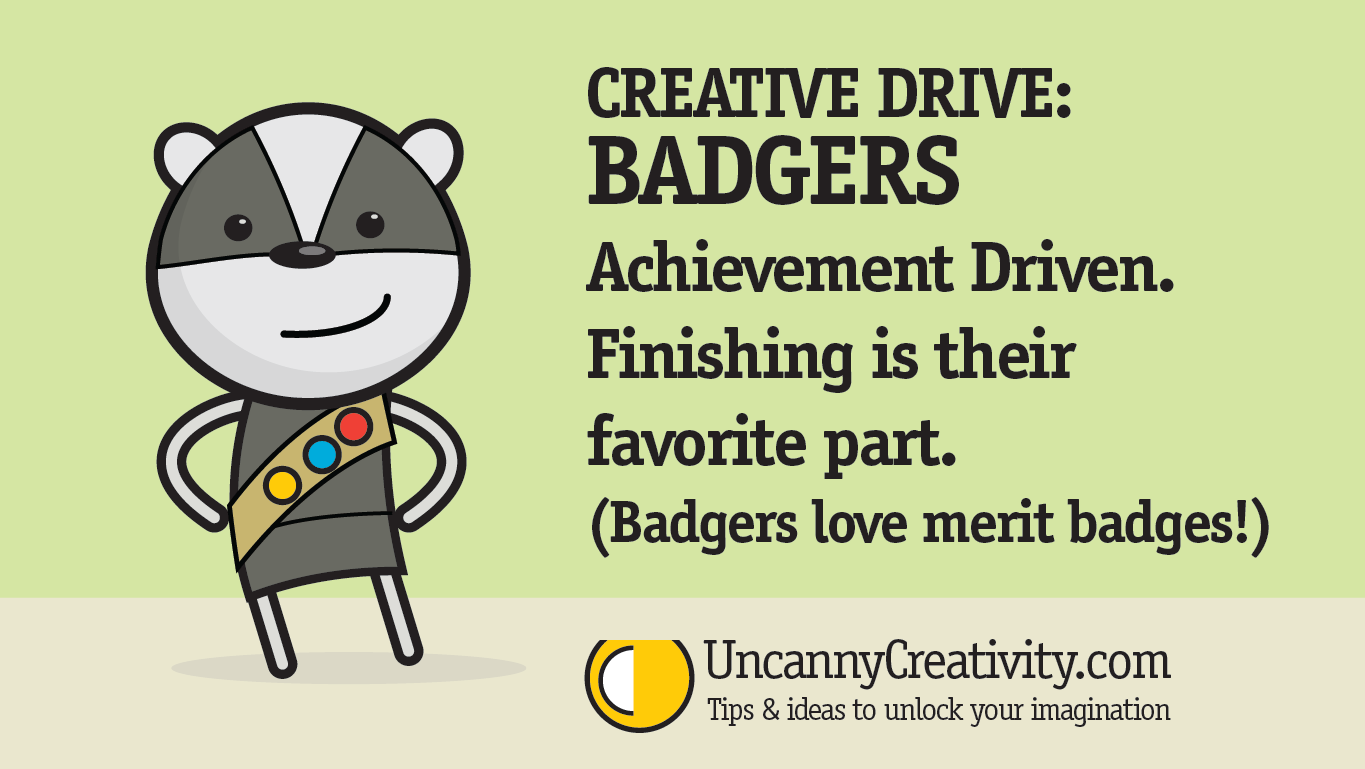 They become the classic gamer who wants to complete 100% of a game.  In their game, there exist only a few items. If you’re a Badger, you’re constantly envisioning finishing every single specific piece and then completing everything. That’s because you know exactly what it is. When given a well-defined goal, a Badger figures out how to beat the game.

Psychologists dub one type of a higher achievement drive as “performance orientation”. This is a high focus on positive outcomes such as grades and promotions. If the goals focus on comparison to others, the outcome can be psychologically negative. This high achievement mindset becomes influenced by environment according to a 2012 study by Stanford psychologist Paul O’Keefe. Healthy goals lean toward a “mastery orientation” where finishing the task with a focus of developing new skills, improving, and gaining knowledge.

A badgers favorite part of creating and making involves completing goals. A badger loves small tasks and finishes them.

A badger wants to start in the right place for a goal they know they can complete. Figuring out the unknown feels harder and less interesting.

A badger might tend to finish tasks that don’t really need to do at all. They write things on a checklist just to enjoy an official ending. They love the feeling of crossing a task off of a list more than the feeling of writing it on their first.

As part of a team, badgers are excellent finishers.

They’ll figure out how to get a task done on time. That’s because they are swiftly decisive when they see a way to cross a finish line. If they’re not given a new finish line, they wander off. They might even finish tasks that have nothing to do with the original goals, just because they know they can finish them off.

What are badgers afraid of?

They may be driven by the fear of not finishing a task and not the fun of finishing. If they don’t see how they can win, they won’t try. A fearful badger may learn to be driven by external recognition of a finished task or by an internal sense of accomplishment.

They do what they can finish easily. They’ll need to practice looking for ways to create finishable achievements. They don’t naturally see those link to real priorities with new projects. They’ll put off looking for goals as a way to delay starting.

Badgers romanticize past wins. In their fishing stories, the fish gets bigger every time. An extreme badger might remember themselves as a king of their high school. Without those kinds of externally focused starts, that same person might not have done as much in regular life.

Badgers learn by looking backward. They love reflecting on completed work. An achievement, trophy or merit badge strongly represents their best qualities. Even when doing a current task, they learn to use past patterns to figure out new tasks. From the outside, this might look like a strong vision and plan.

Analysis paralysis at the beginning.

How can badgers become better at starting tasks?

As badgers love to collect finished tasks, they’ll need to see starting a new task as an achievement. What task can they cross off their list that counts at the start? Get specific on the first step. If a badger learns to see “Finished Starting” as an achievement, they can adopt the best parts of the initiation driven style. Reward yourself at the start by completing even the most ridiculously small step.

Someone on this side of the spectrum leans towards creativity that involves start on a new work. They love to start lots of tasks and all of them seem ongoing. They find more ways to add and stretch any task as they find new pieces to explore. 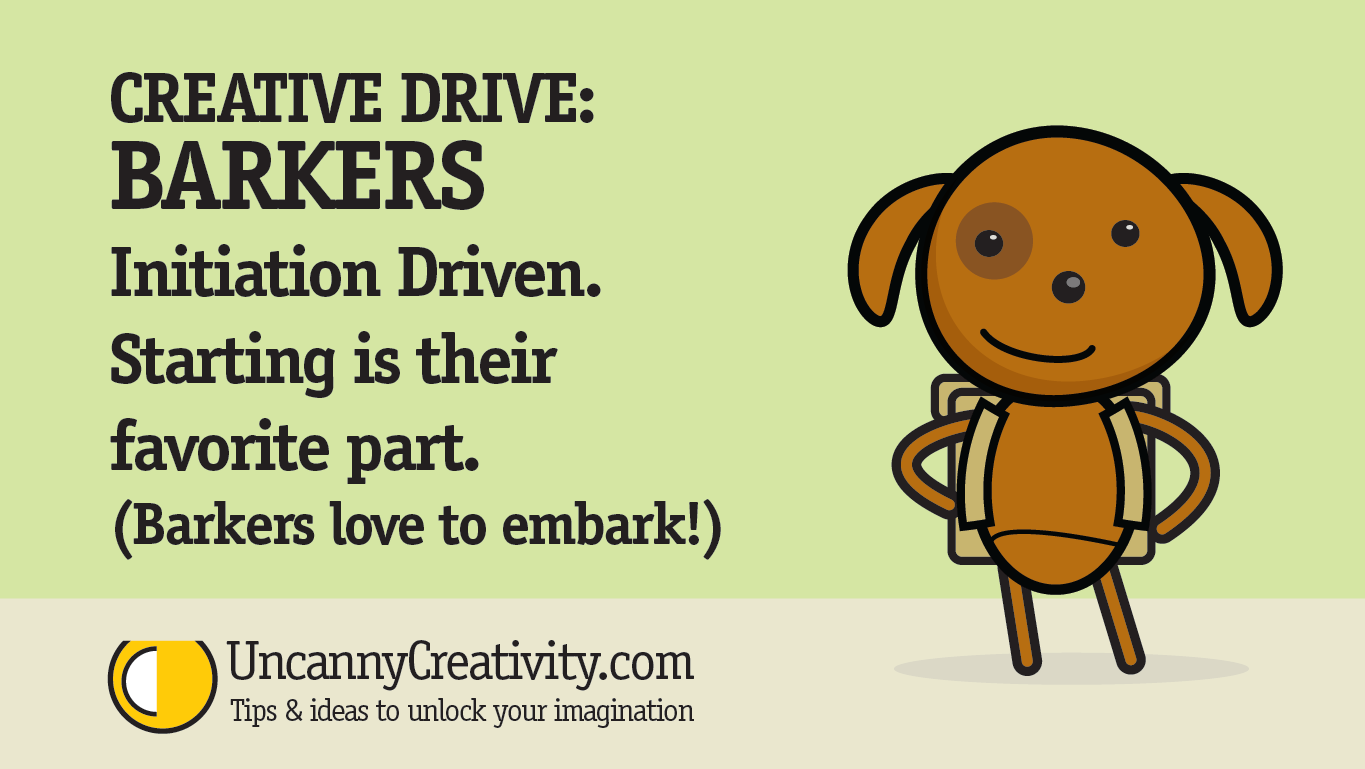 A barker starts a new task with energy and then quickly their attention wanders. They chase the next shiny thing.  After all of this dreaming, their project becomes too big. Their ideas began without defining a clear realistic end point.

Research experiments on abstract thinking links such new goals with discpline. (Published in the Journal of Personality and Social Psychology) This kind of thinking helps barkers dive into new adventures. What’s hard if you’re a barker? Focusing on the smaller and seemingly mundane details along the way.

As part of a team, barkers are excellent starters.

They’ll know the best place to start is anywhere. They’ll remind others to notice new paths to wander. That’s because they are swiftly decisive when they see something new to jump into. They stop at any point due to frustration, losing focus, or when realising how much work they have involved. They may just start something else and forget the original task if not kept in check

What are barkers afraid of?

They’ll start something new and unrelated to put off the old task. If they practice seeing new opportunities to start within the current project, they have a better chance of success.

Listen to more on the podcast:

How to Finish What You Start (Uncanny Creativity Episode 33)

Since a barker loves new beginnings, they open a new and different box of cereal before finishing the last one. Leftovers lose their appeal and they’re ready to cook something new. Creation feels like exploring new wonders in life.

When a barker learns, they love to think about their future use of knowledge or an ability.

Analysis paralysis at the end.

Initiation driven creatives find resistance when they’ve encountered a task that needs a well-defined end. The dream of travel might be appealing to a barker. At the most extreme end of the spectrum, a barker would be paralyzed by the mundane details of travel planning.

How can a barker become better at finishing tasks?

Since a barker loves to embark on new adventures, they have to see the journey of finishing. Get specific on the last goal, break down each small step along the way, and take a minute to see the fun in starting the next little thing.

Research on self-control demonstrates how focusing immediate rewards help us meet our goals. Reward yourself at the finish line by leaping into a brand new fun thing that you’ve withheld beforehand. 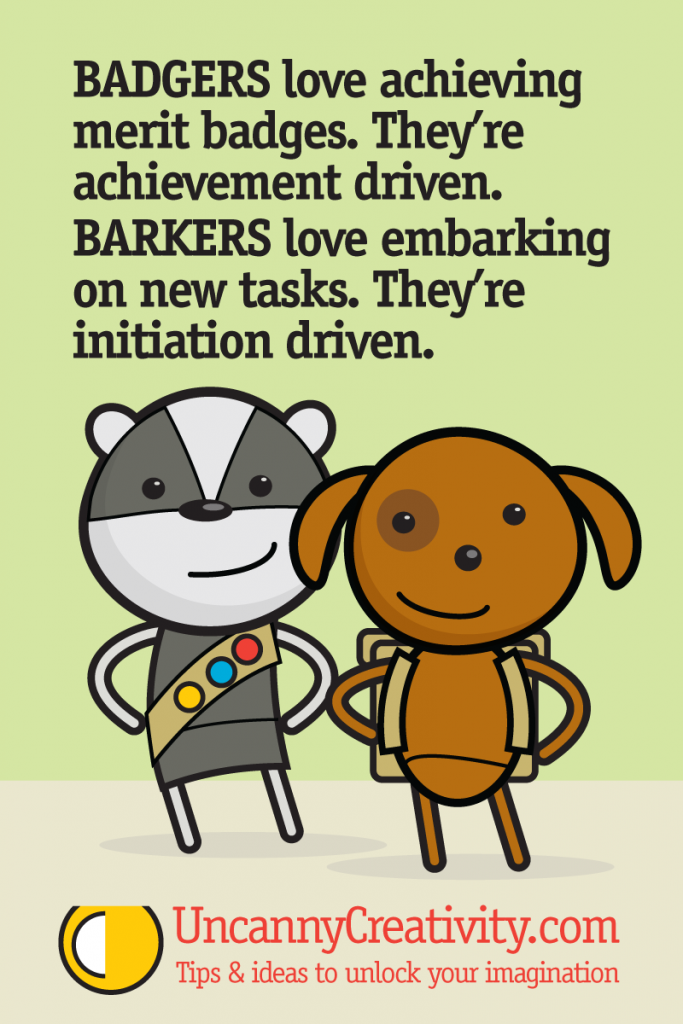